I haven’t written about my husband’s brother’s suicide in a while. Sometimes I’m afraid that people may assume my silence means I no longer care — that I’m over it.

Nothing could be further from the truth.

I think of Petey constantly. For two years, not a day has passed when I haven’t heard his voice or seen his face in my mind. His absence is still felt intensely and immensely, and sometimes the pain is so exquisite I have no idea what to do with the sorrow I feel.

On the home front, living with someone who’s lost someone this close to them is a situation I never appreciated before I found myself here. It is a serious responsibility, at times delicate, never without the desire to bear the entire weight of this grief.

I still despise the way he was treated by the person who was supposed to love him.

I have days when I think “Damn. Petey was the first of us to experience death. What is that even like?” I’ve become an activist for suicide awareness who’s constantly wondering what’s the point of living. The best answer I can come up with right now is that I’m determined to kick life’s ass until it kicks mine.

During the last several months I had been spending a lot of time in my dark place.

Every day and every time I’d walk by our fridge and see the photo taken of Petey in Vegas on Wedding Eve ’09 (the photo of him that everybody loves, because he looks so joyful and carefree and like he had a world full of fun and promise and discovery laid out before him), I was haunted by his last days; what they must have been like for him, and how he went out.

It was getting harder to remember things about him that came before February ’14. I had twenty two years of familiarity to draw from, yet I was programmed to sum up this beautiful man’s life based almost entirely upon his final four days: an unfair and tragic legacy, yet despite my constant attempts I just couldn’t shake this reflexive nose dive into oblivion.

This photo triggered grief, regret, pain, deep sadness and frustration — born out of love, but still raw and intensely depressing. A copy of this same photo sat in a hiding place in my car for over a year because I had to take it down from the clip on my sun visor. My husband had affectionately put it there as a way to keep his brother close, but it shattered my insides to see him there daily while repeatedly transporting the entirety of my brain back to February 22 – February 25, 2014.

Then two weeks ago I had a dream.

I was running water in a sink. My hands were wet and I was intent on washing something. I saw a figure behind my left shoulder and turned.

Shocked to see him, I traversed the four feet that separated us and reached out to touch his arm, not sure if my fingertips would meet warm flesh or ghostly ectoplasm. Solid and alive! I threw my arms around his neck.

“We’ve missed you so much!” I stated, still clinging tightly, knowing he wouldn’t be there with me for long.

I wish I could remember his reply, but it’s enough to know that it was kind and inconsequential.

“Please come back and visit again, OK?” I pulled back slightly from his all-engulfing embrace and looked him in the eyes; eyes full of the life I feared I had forgotten.

Then I woke up, struck by the realness of it all. I felt joy for the first time in I don’t know how long. He was still with me.

The other day I fished Petey’s photo out of my driver’s side door and fastened it back up on the visor.

I am no longer stuck in that house in Fallon, Nevada, watching helplessly as his heart is ripped from his chest, and bullet meets cylinder, then barrel, then bone.

I still miss him terribly, but things have shifted.

Now I know I don’t have to be afraid anymore. 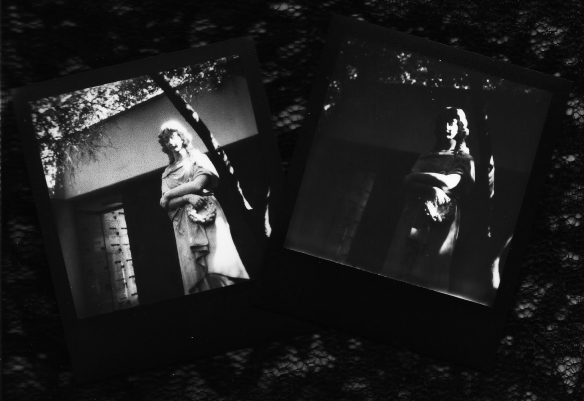 Same camera, same view, different chemistry. Sometimes it’s the stuff on the inside that changes our perspective. — The Building of Eternity, Palm Mortuary, Downtown Las Vegas

“Andrea, you can’t just smile your way through this one.”

(This was Andrew two weeks ago, when a collection of my family members were going through various health-related tests and catastrophes, and my fish’s eyeball was popping out of his head.)

“Andrea, when I came out to visit last time, your brother-in-law had just died and you didn’t say anything about it.”

(I’m paraphrasing Brian here, but you get it.)

(Spoken by every person who has met me during the last ten years.)

Contrary to what you’ve just read, I believe I am improving when it comes to expressing myself in a more diverse fashion. Writing publicly about the personal has played a big part in this evolution: dipping a toe here and there periodically, then jumping in with both feet just last year. It’s cathartic, it’s important, and it’s why I branched out and started this goofy personal blog/photography project. I need to challenge myself to go and do. Frequently.

I enjoy working on my projects, but I also acknowledge that keeping busy can be used as a method of distraction. The reasons as to why you keep busy (and what you’re distracting yourself from) are your business, but I’ll share mine:

I also fall into the category of people who will not unload a 15 minute laundry list of life’s nut knockers on anybody who casually throws out a “how are you?”. I’m just not comfortable with this because:

I’m still finding my way around this grief thing. It’s been almost 15 months since our family became one of those families – the families that lose one of their own to suicide – and I have no idea how this timeline is supposed to play out. We are all still so heartbroken and I have obligations: to keep an eye on those that I can, and to take care of them as best I can. I do my best and sometimes I fear that my best isn’t good enough.

I know that I’m deeply loved by numerous supportive individuals who care about me even if I don’t always verbally share my burden with them. People, please know that this knowledge has at times been the only thing I’ve had to light my way on darker days. You assist me in bearing the weight, whether your hernias realize it or not. You are important and appreciated. Thank you.